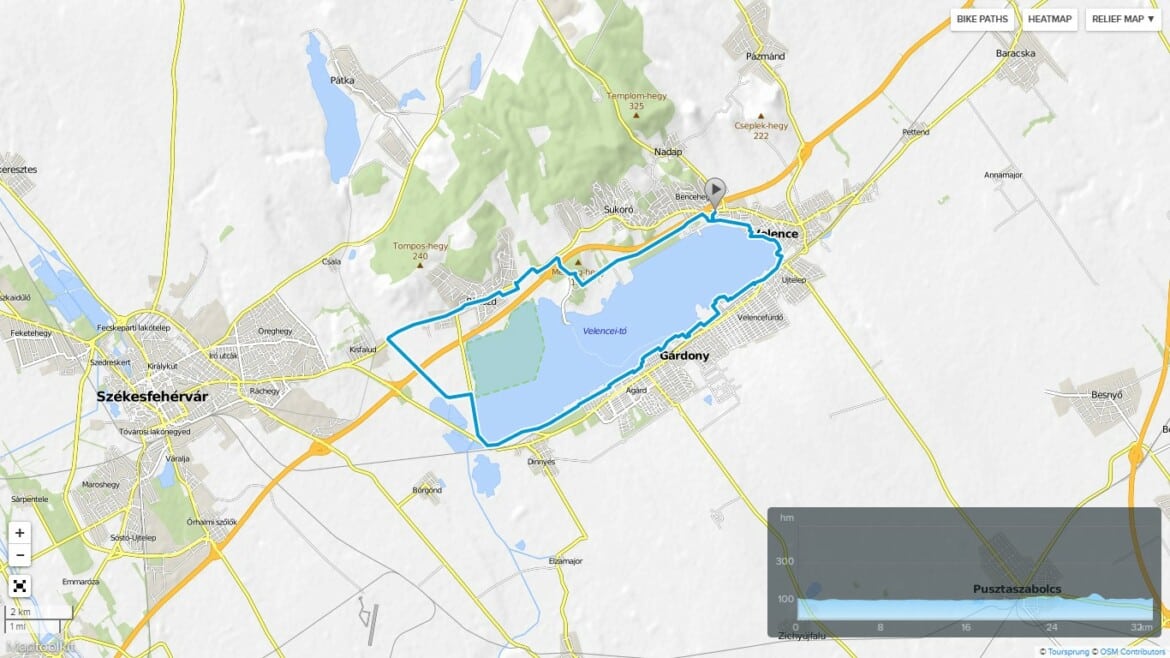 Known as the little brother of Lake Balaton, Velence Lake is Hungary’s second largest natural lake is not only a popular destination for locals but also one of the country’s most stunning places to go cycling. Thanks to shallow water, it has Europe’s warmest freshwater, and it is also a beautiful natural reserve for migration birds thanks to its numerous reeds.

There’s a 33km trail that runs around the lake over flat terrain, making it an easy and very enjoyable route. Running through the communes of Venice, Velence, Pozozd, Kisfalud, Dinnyes, Agard and Gardony, the trail uncovers Hungarian’s lovely countryside villages and lush forests, including many natural and cultural attractions.

The starting point of the cycling path is located in the commune of Velence, right next to a train station allowing to reach Budapest in only 40mn. From the Velence train station, it is possible to access directly the biking path though underground passage, turning right and then left after the roundabout located near the small bridge, towards the lake.

The first part of the path brings us to the nice Velence beach on our left-hand side. Located at a large recreational centre, one can find there children attractions, as well as restaurants and boutiques.

Leaving the beach, we continue our way towards the northern corner of the lake. Then, turning right towards the hills, there is a bicycle service shop a few hundred meters up.  The main road above the shop is leading to Budapest on the right, and we can cross it on the left next to a cemetery. Then we turn to the Panorama Road, which will take us up a steep hill to Mount Bence.

The hill offers a stunning view of the lake Velence, especially from the recently built lookout tower, which rewards the necessary effort to climb a quite steep section of the path.

We then reach a small wood, that transforms into a majestic forest on both sides of the trail. We are surrounded by the sound of silence generated by an intense vegetation. Two signposts indicate a resting place on the lake shore. However, it has no benches to sit on, therefore it feels like it was established as a place rather for the bicycles to rest.

Going straight on, the trail becomes a fairly wide and high-quality bicycle path, before reaching the right junction towards the Pákozd-Sukoró Arboretum.

Going straight on the bike path, we first reach the Military Memorial Park, which is recommended to visit walking around the area. Everyone should do this little detour, as we can see many military monuments in the nicely designed park, offering as well a nice view from the hilltop.

The trail continues around the Mosquito island, towards the village of Pakozd, where a nice tavern can be found, for a possible refreshing stop.

From the village of Pákozd starts a cosy way through the forests of the Sár hill and the beauty of Pogány stones. There are several important archaeological sites around the area, as well as the Pákozd Battle Memorial Museum, which presents the events that took place in 1848 from a military historical point of view. Within the military memorial park can be found the originally shaped Doni Chapel.

A bit further, we can find the entrance to the Pakozd arboretum, just 500 m from the junction, which presents a large variety of trees species for botanic lovers.

Afterwards, the trail moves away from the lake and continues along the motorway.

under the motorway, then turn left to get to Pakozd parallel to the highway. Leave the main road in a short stretch while overcoming a short ascent. Most of the sights of the town are located along the highway. Comfortably, you can go on a bicycle path, where the road is right, on your left.

Marked mountain bike routes provide access to movable property. The detour is on a steep road and only the first stage is covered by asphalt.

Approaching the western edge of the swing, you can choose to shorten the way or continue following the cycle path.  In order to follow the slightly longer but better-quality road, we do not turn left but continue rolling on the bicycle path. We cross Pakozd’s industrial site, and then go on though the fields for quite some times. We can then see the first houses of the Kisfalud district of Székesfehérvár, when we turn left after reaching the Emperor’s water.

If we favour the short way, we can turn towards Dinnyés and Seregélyes on the left through Gábor Áron Street. We then go straight to the western edge of the lake and then cross the highway. This section is of poor quality, but goes alongside the lakeside reed, where we can sometimes view different varieties of migration birds. Dinnyés, this other village on the lake’s shore attracts a lot of tourists, coming to discover its colourful tradition conservation programs. Dinnyés is also the location of the Saint George Catholic Church, built in 1820, and noticeable for the stone sarcophagus in front of its entrance.

Coming back to the lake, with road number 7 on the direction to Agard, we can admire the lake and the Velence Mountain on the other side of the bike path. Agard is Velence’s oldest resort, famous for its beaches, thermal spa, as well as its Palinka distillery. For the first time in the trail, only the reeds surround the shores.

From Agard, and all the way through the next small town of Velence, there are two bicycle paths running parallel to the shores: one next to the road number 7, and another, cosier one, right next to the lake’s shores.

The first path runs though nice fish and grill restaurants, while the second cycling path runs through beaches crowded with bathers from the early warm days of spring.

Gardony is also famous for its summer resorts, offers train stations connected to Budapest and Székesfehérvár. This is the last part of the trail, before reaching back our starting point at Velence, to conclude an enjoyable and enthusiastic ride around  Velence lake.