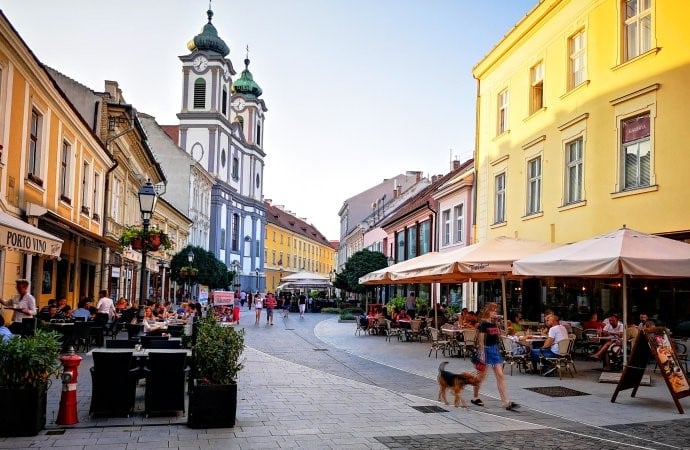 Located around 20km away from Gardony and easily reachable with the train, the city of Székesfehérvár (derived from Fehérvár, “white castle” or Alba Regia in Latin) is the ninth largest city in Hungary, with a population of around 100.000 people, and it is a regional capital.

The city was founded in 972 by Grand Prince Géza of the Árpád dynasty, who was the overlord of all seven Magyar tribes. As capital of the Kingdom of Hungary, it held a major role in the Middle ages, since all the kings of Hungary were crowned and buried there until the middle of the 16th century.  In the 12th century, the town prospered, churches, monasteries, and houses were built. It also became an important station town for pilgrims on their way to the Holy Land.

András II issued there the Golden Bull in 1222, which detailed the rights of the noblemen and the duties of the king.

After managing not to undergo the Mongolian invasions of the 13th century, the city was conquered by the Ottomans after a long siege in 1543. During their almost 150 years long ruling, Ottomans destroyed the cathedral and the royal palace and pillaged the tombs of the kings.

The city started to prosper again under the leadership of Marie-Therese, Empress of the Habsburg dynasty, and new buildings were erected (churches, monastery, palaces).

After the 1848 revolution and war for independence, the city lost its importance and became mostly agricultural.

During the second world War, Székesfehérvár which was an important roads and railways node was the theatre of intense fighting between the Germans and the Russian. In March 1945, the area was the battleground for the last major German offensive of World War II; but following its failure, Marshal Tolbukhin broke through the German lines once more and freed the city on March 22nd.

Under the socialist regime, it became an important industry centre, with large aluminium, bus, TV and radio factories. After the fall of the Berlin wall and the independence of Hungary, it became a successful example of transition to the market economy, as a destination of many international firm’s investment projects (Ford, IBM, Alcoa, Philips).

Another interesting local attraction is the impressive Bory Castle, built during his lifetime by architect Jenő Bory from 1923 until his death in 1959. It encompasses hundreds of paintings and sculptures.